Ok so my system is modest compared to some of the other systems i have seen on here but I thought I would share anyways so here goes. I only have one PC that serves as the HTPC and media server. I then have two netbook (ASUS 1000 HA) that my wife and I each use for general web surfing etc, and I have a macbook pro that my wife uses for photo editing/blogging (http://www.newlywedinneworleans.com if you are interested, shameless plug). The HTPC is directly connected to my main TV which is an LG 32FZ4D-UA (old CRT TV but does 1080i and has HDMI input so works for now, will upgrade as soon as I am out of school and have a job). I then use RDP on the netbooks to access the HTPC to preform maintenance/updates etc. Before I get to the pics I thought I would lay out the basic specs of the HTPC, which is running win7 ultimate.

So now for the fun part, the pics. This first pic is from the main HDTV viewing area. You can see the TV cabinet that houses the HTPC/Subwoofer. Now I know that this is not the ideal placement for the subwoofer but it "looks pretty" so that is why my wife made me put it here, note the pretty wicker basket below which contains our DVD's. Eventually when i get an amp and an actual 5.1 setup I will have the sub placed in a more optimal position. The only real problem now is that i sometimes get a re-verb on really high bass but other than that its not too bad, at least for me. 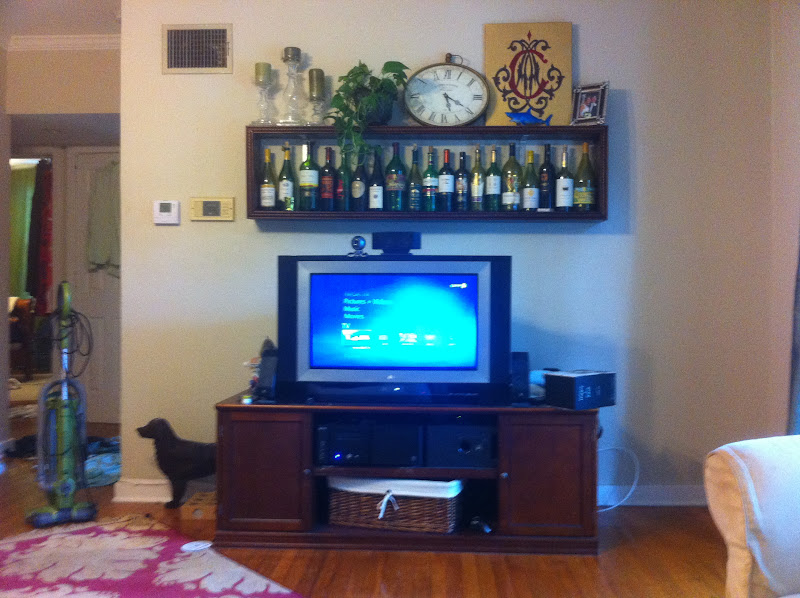 The far right drawer is where i house the cable modem, router (linksys WRT160N), Tunning adapter, My book and UPS battery. I have the HTPC, powered bidirectional cable splitter, tuning adapter and linksys router connected to the UPS. I had the TV connected as well but that was overpowering it and so i had it removed. The main point of this is really to insure that minor power fluctuations (which we get all the time in new Orleans) don't disturb the recordings. Thus the fact that the TV turns off and on doesn't really matter as the HTPC keeps humming along and a simple rewind will allow me to see the part of the program I missed. 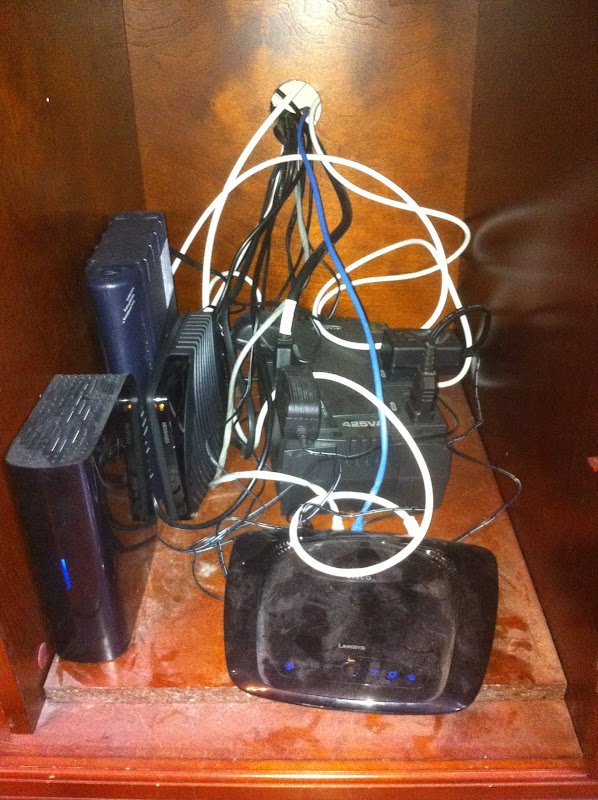 The next picture is taken of the components that i have sitting next to the TV. This is the main surge protector that the battery backup is connected to as well as where the TV speakers and other non essential components are connected. You can also see the powered bidirectional splitter that first splits the cable into four, and then i use a two way and four way splitter to achieve the total number on coax lines that i need to power everything. (Ceton, TA, cable modem, TV (as a backup for when the HTPC has issues def a WAF saver) aver-media tuners (2 lines for each) 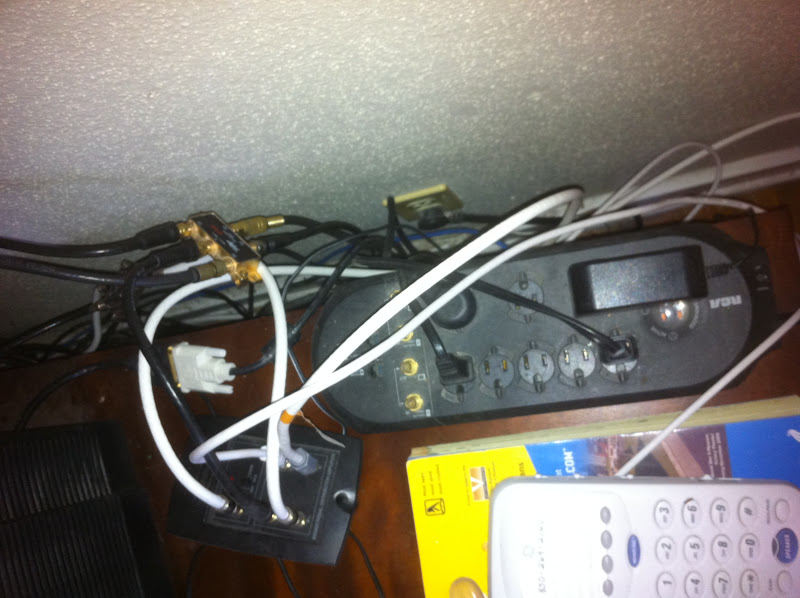 OK so now for the pics of the HTPC. This first pic is of the space behind the HTPC, note the sub on the right. You can see where all the cables route in that must then connect to the back of the PC. Also you can see the 120mm case fan that I had to install for cooling. I power this fan by running a molex power connecter out the back of the PC that way the fan only turns on when the PC is on. After adding this fan my temps droped 10c all around so it was a welcome addition. Furthermore the reduction in heat greatly increased the overall stability of the system, this is a must have for anyone that has there HTPC in a closed cabinet similar to mine. 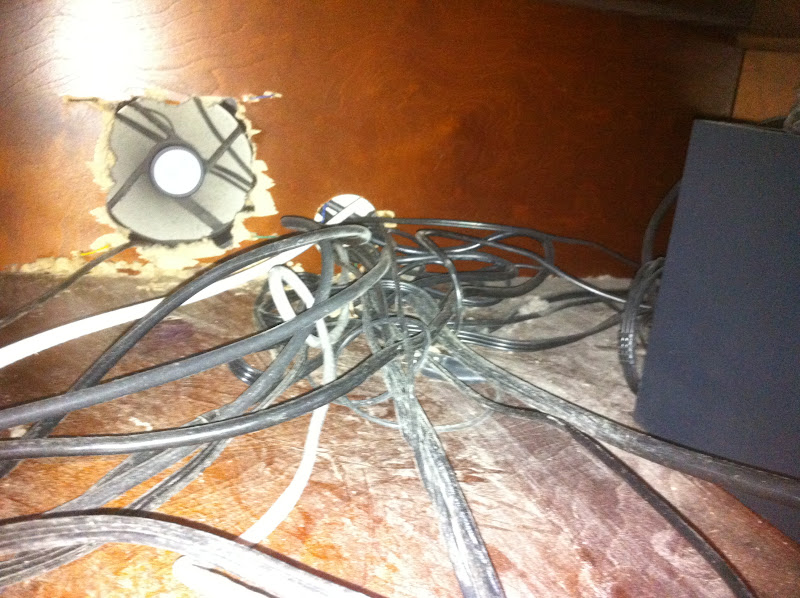 First pic of the HTPC with the lid off, You can't see much because the support braces are still on. 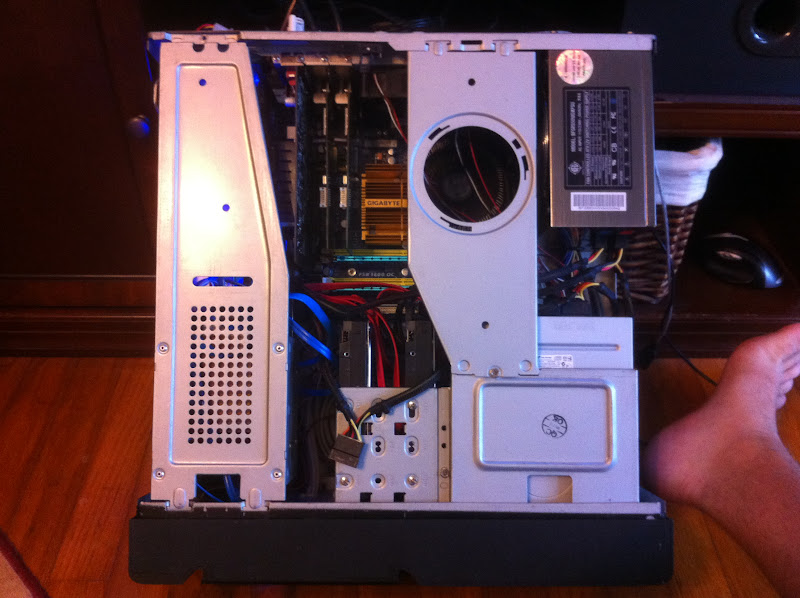 Here is a pic with the right brace taken off. Now you can see the two 2TB hard drives that I have in software raid 0 for recorded TV. You can also see the two aver-media tuners. One annoying thing to note about my particular combination, this is offered as a warning. Is that two of the pci-e 1x connectors are placed in a position that full length cards cover up the first dimm slot (in yellow) therefore I am limited to only using two slots (to stay in dual channel) This is not a huge issue for me as 4gb's of ram is plenty and I will probably buy a new motherboard before I will upgrade ram. But it has forced me to make some concessions and if I do ever want to upgrade ram I will have to remove both of the aver-media tuners. You can also see the power supply, a thermaltake modular 650 watt (overkill I know) and 2 60 mm exhaust fans as well as the disk drive. At some point I plan on doing a better job routing the fan cables, but that is for another day. 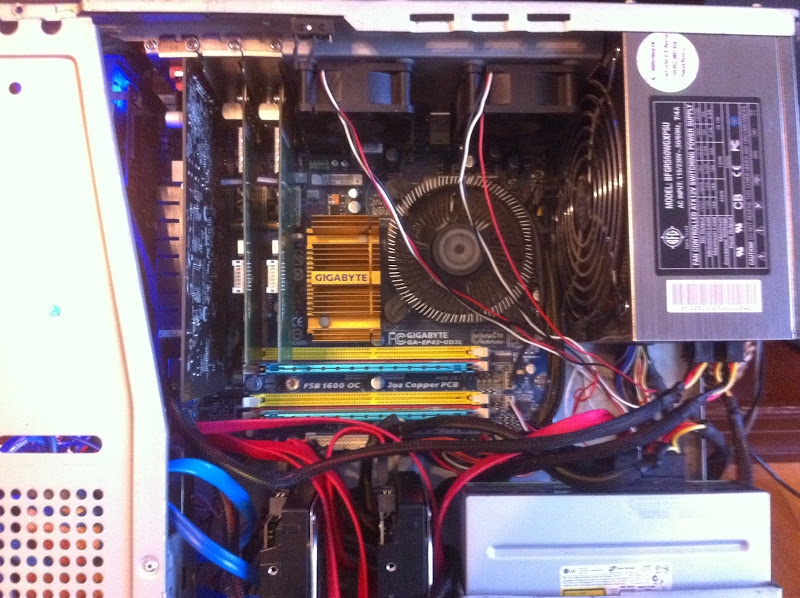 These next two pics are of the left side of the case with the support bracket removed. (this bracket also has an additional two 3.5 inch bays more on that later) Here you can see the 80 mm intake fan as well as the rest of the expansion cards (ceton and graphics). Note the opening between the ceton card and the graphics card this is where i have the molex connector routed our the back to power the 120 mm fan that is attached to the cabinet. The bright blue light is from the Antec Vcool graphics card cooler that intakes and blows are directly on the Ceton, this dropped my tuner temps by 5-8 degrees. 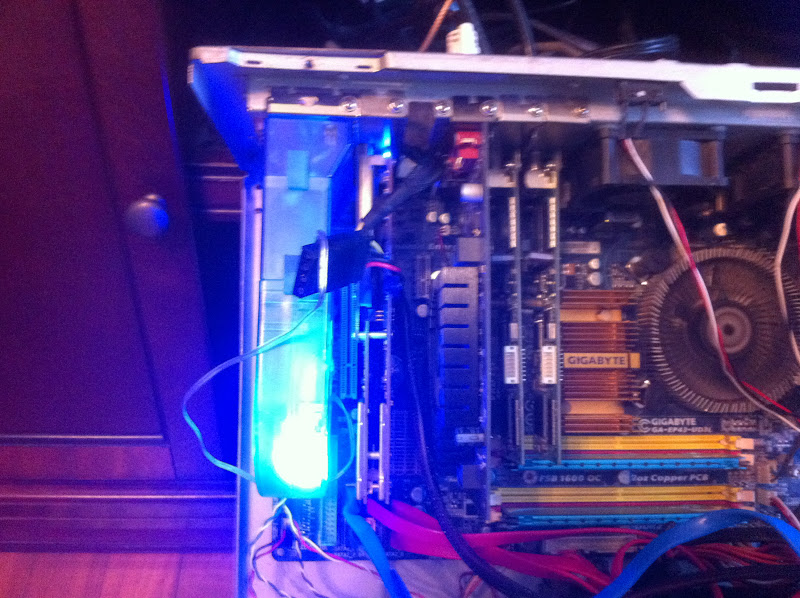 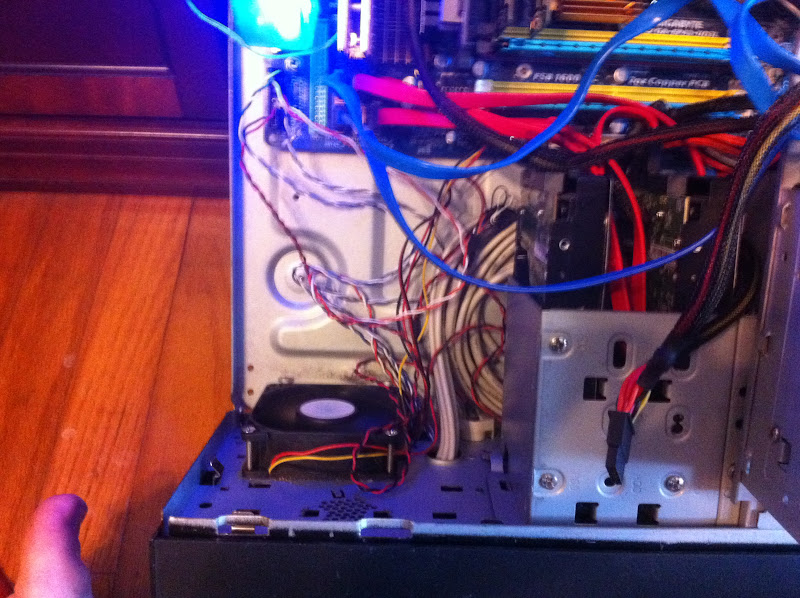 Here is a close up of the left support bracket and the additional 3.5 inch bays. Which is where i have the 2tb and OS drives. 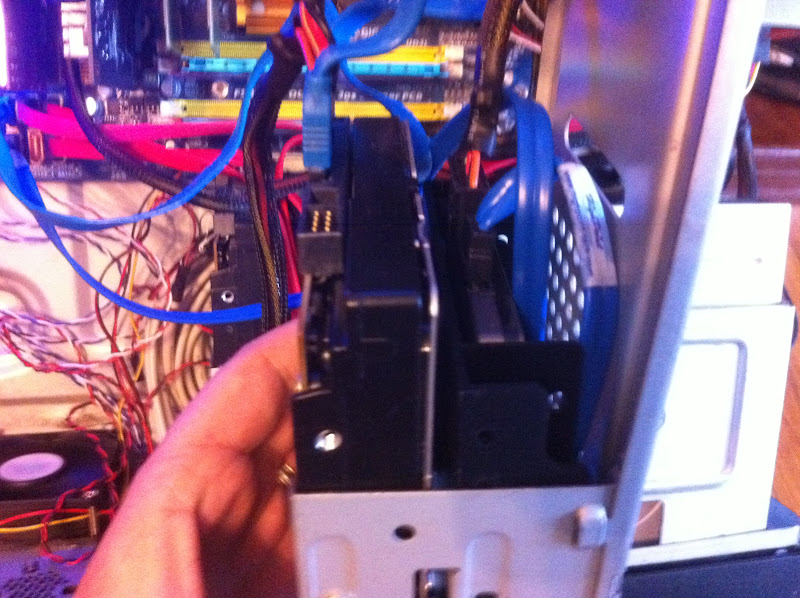 And then last but not least is the Logitech remote that I use to control it all.... 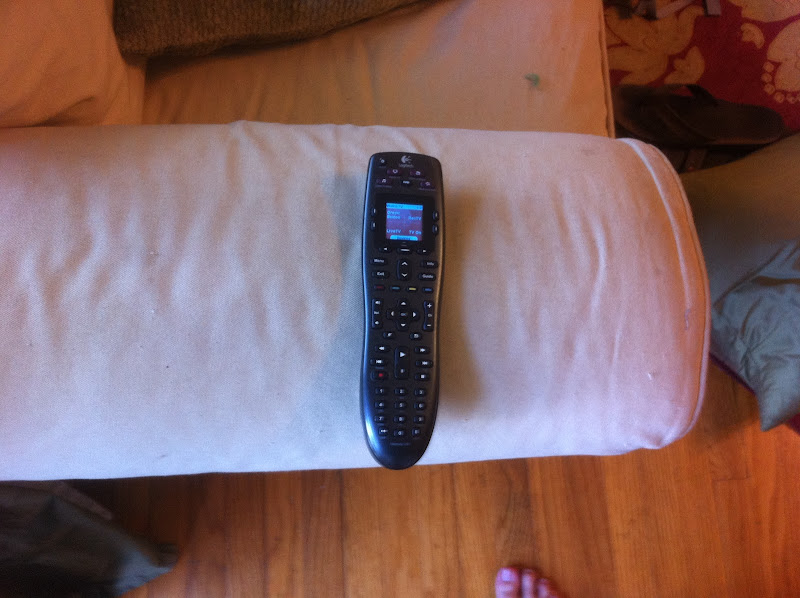 At least that is whenever our cat Hobolochito relinquishes control of the system.... 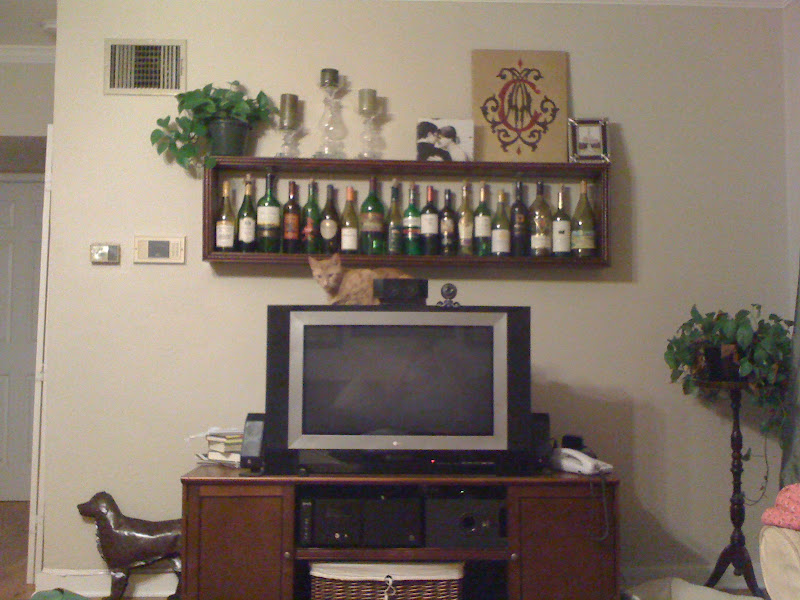 Well in a nutshell that is my HTPC setup, not too elaborate but it gets the job done and definitely manages to impress all my non HTPC friends when they see all the things we can do with ours.

Nothing wrong with that setup other than the wife needs to dust. Tell her that's the trade off of having to stick the sub where it looks pretty.

Yeah the dust in our apt is really bad (old building). That is one month of buildup......
Top

Very nice... i think i'll have to post my poor-medical-student setup as well

Does the cat come standard with all LG televisions?
My Channel Logos XL: Get your Guide looking good! ~~~~ TunerSalad: Increase the 4-tuner limit in 7MC
Top

however I know that our cat will not be happy when I eventually upgrade to a bigger flat screen TV as he will lose one of his favorite places to sit.

Top
Post Reply
8 posts • Page 1 of 1
Powered by phpBB® Forum Software © phpBB Limited.
This website is not affiliated with Microsoft. All Windows and Media Center logos and trademarks are the property of Microsoft Corporation.